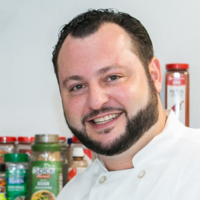 Chef Jonah Nissenbaum, a graduate of The Culinary Institute of America in Hyde Park, New York, worked in kitchens from Boston to New York and for nine years in the Crescent City where he was at award-winning restaurants like Ralph Brennan’s Red Fish Grill, Arnaud’s, Commander’s Palace, Vitascope Hall at the Hyatt Regency and as banquet chef for the Intercontinental Hotel.

However, he says, by far his greatest reward has been as a husband to his wonderful wife and father of two young children.

As a family man, Nissenbaum fit right into the Sterling family as executive chef overseeing patient dietary operations, staff nutrition, and special events. He brought along a full menu of culinary and management skills, complimentary meal development, dietary planning, team building, and employee engagement. Additionally, his financial management, associate training, and leadership skills are strong, and his sanitation and hygiene demands are second-to-none.

Having learned from-scratch cooking in his mother and grandmother’s kitchens and honed his restaurant skills starting in a Boston pizza parlor at the tender age of 14, he understands well how food is a part of both culture and good health. He uses his passion to help facilitate the healing process in patients and to evoke memorable experiences and positive moods in the Sterling staff.

Nissenbaum relishes the relationship-building he’s able to achieve in a smaller setting and is constantly energized by the challenge of building unique experiences for the people he serves.